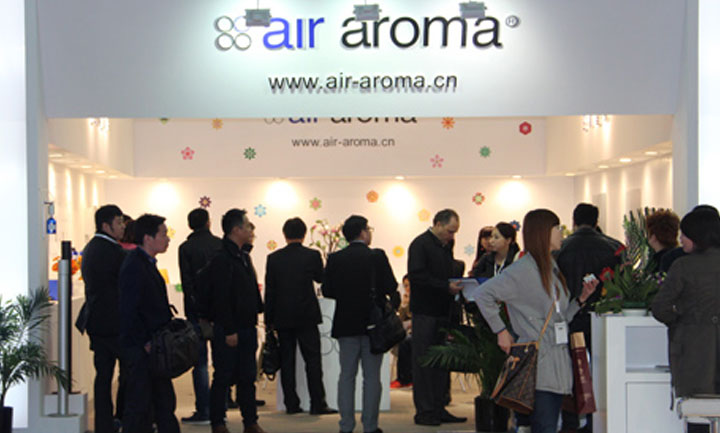 Air Aroma scent diffusers and fragrance range was on show to those in attendance and Air Aroma also officially launched to the Chinese market the new diffuser known as Aromini. This certainly caught a lot of attention throughout the exhibition. In addition to the diffusers and fragrances, Air Aroma China also showcased and retailed various therapeutic sprays. The focus was on functional sprays, including Arobalance – relieving stress, Arotec – removing odor and another Air Aroma branded spray that assists to relax and help us sleep.

During the HotelEx, Air Aroma of course also diffused scent via our patent technology – ‘cold air diffusion’. The atmosphere created by the fragrance of Citrus Orange certainly attracted attention and served its purpose to create a great buzz for the stand. The fragrance was a great advantage and marketing tool that allowed Air Aroma to introduce itself to the global marketplace and many international businessmen and women attending the event.

The hotel industry has always been well accustomed to fragrance however at this event many different industries such as repast, building, design, textile, estate and corporations were interested in learning about how Air Aroma could assist them with their scent strategy and marketing needs. Each business wanted to make sure they could stand out in their specific industries and get a competitive advantage.

To learn more about scenting for hotels visit the Air Aroma Hotel Industry scenting page here or find out about other industries that are also using scent here.